Privacy Concerns, Fake News, and A Move to Private Spaces on Social Media 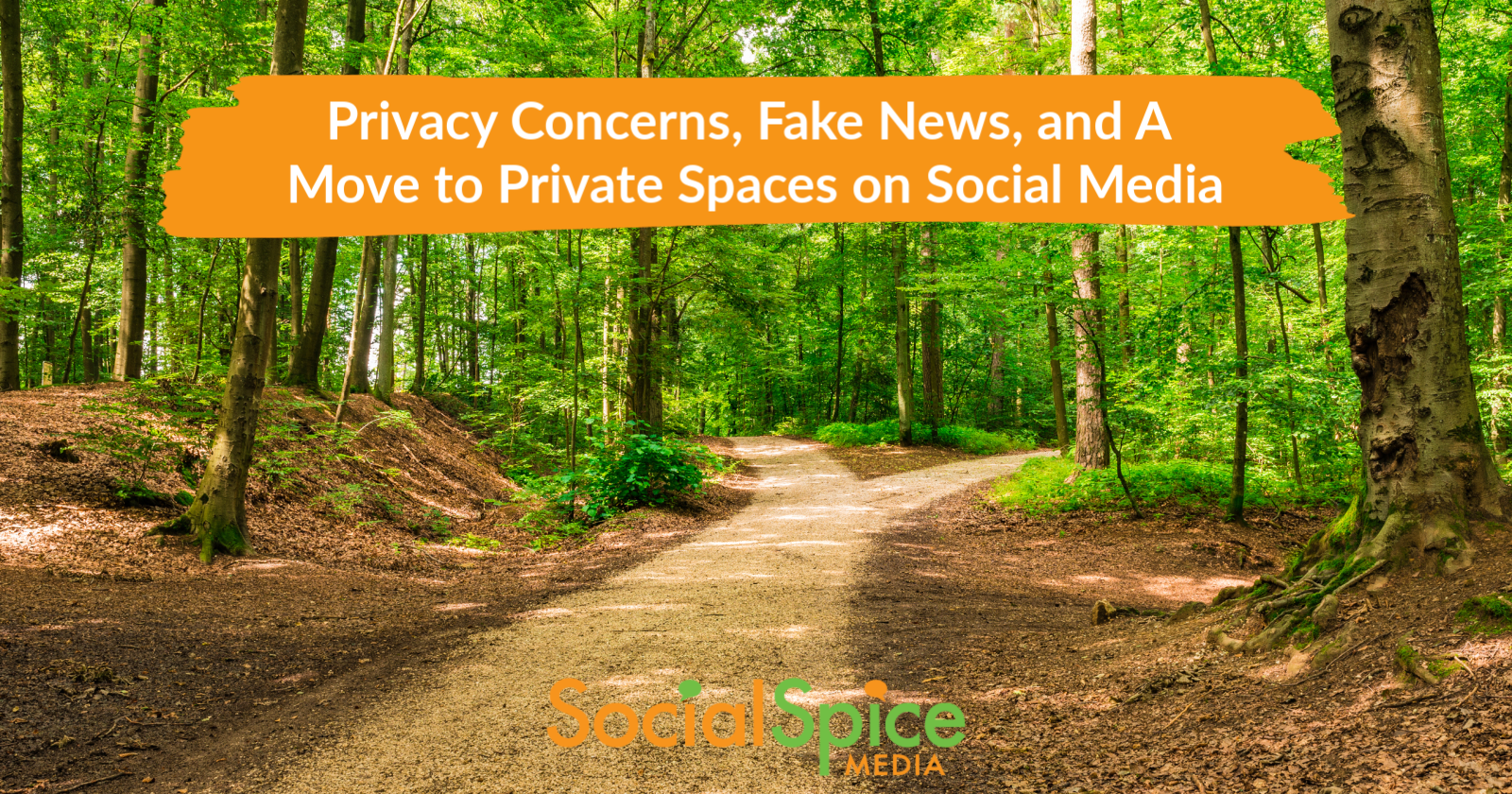 Social media channels as we know them have been around since the early 2000’s, but their usage has popped from just a few million people in 2005 to more than 2.6 billion people today.

The best performing tech stocks are colloquially referred to with the acronym “FAANG” (or “FANG”): Facebook, Amazon, Apple, Netflix, and Google.

Because social media taps into our human need for social interaction, it has had an unprecedented effect on communication, permeating everything that we do, personal and professional. We now can meet new people, keep in contact across international borders, and reach new, larger, and more targeted marketing audiences than ever before.

But as social media develops and better refines its targeted marketing, the controversy of privacy and individual freedom gets louder.

While Facebook has never charged for use, it’s no secret that it has had a lucrative career of charging advertisers for its targeting data and exposure to its audiences—sometimes putting people’s data in the wrong hands or aiding in the spread of fake news and propaganda.

So how will social media change as a result of privacy concerns and fake news saturation, and how can businesses adapt their digital marketing strategies to thrive in the new climate?

Facebook’s inception began with the creation of a website called “Facemash” in 2003 when Zuckerberg was a sophomore at Harvard. Students were invited to rate the faces of other students on campus for attractiveness, and while the site was popular, it was shut down for violating the school’s privacy policy—Zuckerberg used the photos of students without permission. How did he get them in the first place? He hacked into the school’s system.

Just a year later, Zuckerberg along with 3 others would create Facebook in a Harvard dorm room. However, he later faced a lawsuit with Divya Narendra, Cameron Winklevoss, and Tyler Winklevoss for stealing the code and ideas he used to create Facebook from what was a mutual agreement to create a like site as a team. The settlement ended with a penalty of over $65 million.

Nonetheless, Facebook has become a sensation in the digital landscape that can’t be ignored. But, the history of its creator can give some insight into the distrust for Facebook as a network.

WhatsApp was launched in 2009 by two former Yahoo employees, and was purchased in 2014 by Facebook for $19 billion. While the app made little money and was mostly popular outside of the United States, it was perceived as a huge competitor to Facebook.

Shortly after, Instagram launched in 2010. Facebook bought the photo sharing network for $1 billion in 2012. Instagram had about 30 million users, but now has more than 1 billion. Its revenue has also increased from 0 to a whopping $570 million in the first quarter of 2016 for Facebook.

Facebook and its creators had clear intentions of being the largest social network conglomerate—which set it up for the big data breach in 2016.

Since the 2016 election, social media networks (especially Facebook), have been heavily criticized over data and privacy breaches as well as fake news and hate speech circulation.

According to The Wall Street Journal, the Cambridge Analytica data firm was accused of improperly using data bought from Facebook. The firm used “psychographic” profiling, potentially to target voters in a personalized way to steer the direction of the election. This has been referred to as Facebook’s biggest data breach in history.

This controversy brought CEOs and representatives of various social networking sites to speak with the U.S. Senate's Select Committee on Intelligence in 2018, including Twitter’s CEO Jack Dorsey, who said that while they’re “…extremely proud of helping to increase the accessibility and velocity of a simple, free and open exchange [they] aren’t proud of how that free and open exchange has been weaponized.”

Facebook is so mainstream and incorporated into our social circles that nearly everyone has a profile—making nearly everyone vulnerable to a data breach that affects the entire network.

Public trust in Facebook has dwindled over the past few years. Last year, Facebook’s reputation score out of 100  visible public companies dropped from 94th to 51st.

People have tended to move from public social channels to private encrypted spaces, such as WhatsApp. Even though WhatsApp is still owned by Facebook, it’s messaging is encrypted so even Facebook can’t see it, unlike Facebook and Instagram messenger.

Facebook has made some recent attempts to reinforce its respect for privacy. For example, users can now know more about why they are targeted by a specific Facebook Ad with the “Why am I seeing this?” option.

To fight discrimination, Facebook has restricted targeting options for some companies regarding housing, employment, and credit ads targeted age, race or gender.

Zuckerberg has talked about encrypting the content on Facebook and Instagram messengers, meaning that not even the network would be able to read it. But Facebook has garnered a reputation of distrust from its users, and encryption could challenge Facebook’s current business model that makes a profit from mining personal data in order to target for ads.

What This Means for Social Media Marketing

Is social media marketing on its way out? Absolutely not. But there are changes in the way digital marketers need to approach the platform. As always, Facebook is underdoing a lot of changes to its algorithm, and due to new privacy needs and potential future laws, marketers will need to take a few things into consideration.

Facebook is going to be focusing more of its time and energy on weeding out fake news claims, with a heavy focus on false wellness claims. If your company uses language that may be interpreted as an exaggerated wellness claim, Facebook’s algorithm may hurt your Ad’s reach.

Another key take-away is the move from public social networking spaces to private ones. Many marketers are seeing a lot of success with using messaging apps. For example, Social Chain has seen an open rate of over 98% and a click through rate of 25%.

Quality content as always is the best way to reach your audience, and Facebook is trying to find ways to streamline the process of highlighting it and weeding out everything else. Videos that are shorter than 3 minutes won’t do as well as longer ones, and something called the “Click-Gap” may punish marketers who rely on click-bait articles. Sites and posts that generate a lot of engagement and clicks on Facebook but not as many on the rest of the internet may have their reach limited in the News Feed.

Google is also taking steps towards protecting privacy for its users, such as giving them more information and power over which cookies websites have installed on their browsers. Google is also prohibiting something called fingerprinting, which is another type of online tracking used by some websites.  But unlike Apple, cookies will not be automatically blocked—users will be given the choice.

The ultimate consequence of these shifts towards privacy will be that audience targeting will be more contextual rather than personal. Producing high quality content that appeals to potential customers on a personal level is the best way to go. By creating your own personal target audience that has interest in what you have to offer, you can create Ads that are related to specific pages your audience visits or services they have shown personal interest, rather than targeting them by data groups.

Get in touch with Social Spice Media to learn more about creating a marketing plan for your business and how you can effectively spend your marketing dollars. Our team pays attention to your goals and creates a custom strategy that delivers results.   Do you know someone who could benefit from our services? Refer them to us today! Our team is eager to connect with businesses in any industry. We serve the local needs of Ventura County and Santa Barbara as well as anywhere in the United States.

Samantha is a Copywriter & Content Creator for Social Spice Media. Her role includes writing content for social media, business blogs, and creating custom graphics. She has a diverse background ranging from retail management to filming and editing for newscasts. She studied broadcast journalism and interned at Power 106 on The Cruz Show, for marketing and producing. Samantha has a passion for social media marketing and growing brand images.

She has a Bachelor of Arts in Journalism from CSU, Northridge. Before joining Social Spice she worked for marketing agencies giving her the ability to manage multiple clients at once.

In her free time she is a puppy mother and enjoys doing DIY projects around her house.

In her free time, Caitlin enjoys writing creatively, dancing, and adding stamps to her passport.