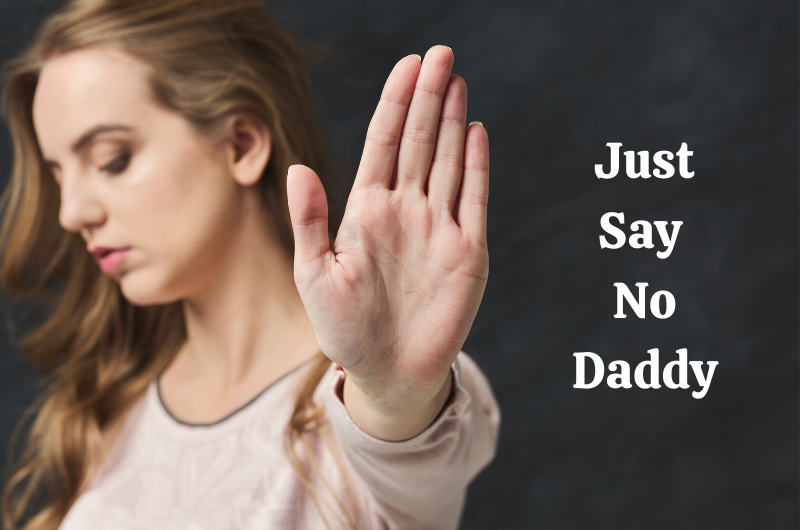 25 May Just Say No Daddy

Posted at 08:53h in Business Blogging by Social Spice Media
0 Likes
The domain NoDaddy.com isn’t returning as the website conglomerate that it was essentially mocking, GoDaddy.com, purchased the domain from the previous owner in an attempt to destroy the negative attention caused by it. However, GoDaddy.com, has begun providing new services, which is cause for skepticism based upon its service performance (or lack thereof) in previous years. Not only have developers found a slew of problems with the technical aspects of the website design and hosting business, but GoDaddy itself has acquired numerous moral discrepancies with its customers and the rest of the world over the years. If you host with GoDaddy, you should be wary of the many issues and threats they pose to your business, as well as how they left all their daddies out in the cold previously:

Site Migration is Hard If You’re Already Hosting with GoDaddy

If you host with GoDaddy, but become unsatisfied with their services (which many customers do) transferring your site to a new host can be a difficult task. Developers warn against the GoDaddy hosting services with great caution in the first place, and state that trying to move a site to a new provider produces lot of unnecessary frustration and expenditures.

Go Daddy offers low prices, very low prices. And although this might be beneficial to a person trying to make and host a website on a low budget, the ROI still is not worth it. With all the potential complications you could have, paying slightly more for better service is a much greater option. Moreover, the probability of GoDaddy randomly raising prices on hosting after a year or so is high.

The Services They Provide Have Issues

It seems like GoDaddy has had never-ending, serious issues with the services they provide. And in a way, that has just become a part of what it is to use their services in general. They are still one of the top hosting websites in the world, yet have never been able to avoid the common issues that have riddled them from the start. Their hosting has been said to be slow in general, with server crashes causing plenty of customers inaccessibility to their site. Here’s a map of GoDaddy's server crashes across the United States on a random Monday: 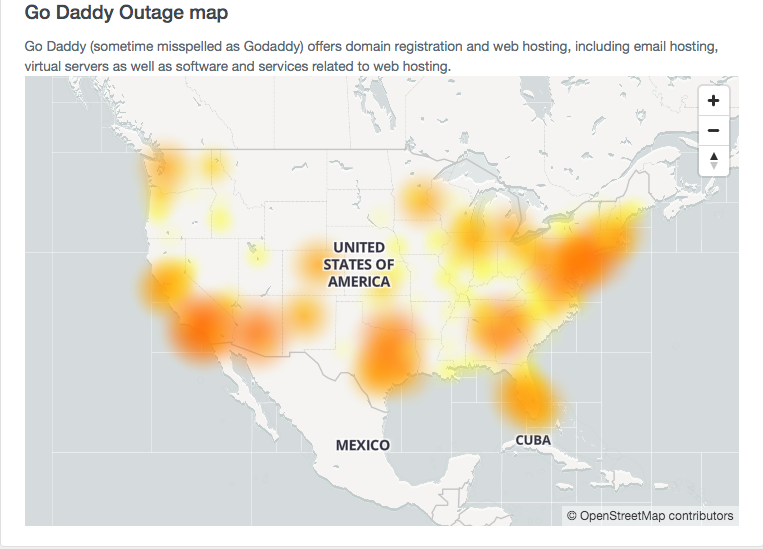 Crashes in nearly every state can be seen. As one of the largest hosting services, you’d expect better control over their servers. You’d also expect better customer service.

GoDaddy has used, and I write this lightly, less than legitimate advertising practices in the past, as well as had some questionable moves by their previous CEO, and has supported groups that focus on the belittlement of the world rather than the betterment of it. Some of these moral issues with the business include:

Remember when you thought GoDaddy was some kind of online adult store because of their use of promiscuous voicing and half-naked women in their advertisements? And then you found out they were actually an internet hosting services and it made absolutely no sense? We do too, and although they are a top web hosting service still, this sketchy form of advertisement is still haunting GoDaddy to this day.

The previous CEO of GoDaddy, Bob Parsons, randomly, and arguably unnecessarily, went elephant hunting in Zimbabwe in 2011. He backed his reasoning for it in a New York Times interview stating, “Am I rocked over it? No. Am I sad that I put it up. No. Do I plan to do it again? Yes.” He may have just been better off donating to the community instead of killing an elephant. He continued, “More than likely this will get worse … One solution may be to get rid of the elephant … Over time, this is going to get worse.” He was referring to damages that elephants cause to African communities and in the time since 2011, the situation doesn’t appear to have gotten worse, at least not substantially.

In recent years, GoDaddy has been the domain registrar for The Daily Stormer, AltRight.com, and a slew of other white-nationalist and neo-Nazi groups, making its moral grounding questionable. However, if these groups do not cross certain boundaries there is no reason for GoDaddy not to provide them services. Yet it brings into question whether they are business that the general public should host with based upon moral beliefs and hopes for general safety within the United States.

The Internet’s Fight Against GoDaddy

A website created called Antigodaddy.com contains a number of different complaints from the mid-2010’s about the malpractice by Go Daddy. These complaints range anywhere from domain name problems to issues with server crashes. Although Go Daddy has undergone some significant changes in recent years, these issues are still not to be ignored:   “ When it works, it works great. When the server goes down you will have no access. When it finally comes back up, it can take days to get the issues resolved. You will send emails out and receive them; however, neither party will get the email. They are lost in cyber-space. Just look at their discussion forums -  you will find a list of technical issues and complaints. Good luck running a business with this group” – Drew   This testimonial captures it all. From issues the individual had himself, to warning other businesses not to use their services, Go Daddy has been less than competent for its customers in previous years.   “I’ve apparently been paying for some web hosting I never approved or purchased. It’s been automatically debiting an old joint account I had when I was married … I never authorized this, nor did my ex-wife. I called GoDaddy, and they keep telling me they have nothing on file .. I’m closing the account, but still out all this money. I don’t have a clue how to resolve this.” -DZ   This isn’t the first complaint of billing issues associated with GoDaddy and won’t be the last. Over the course of years, complaints of billing issues such as paying for initial hosting services and then being notified that renewal prices being hiked have caused customers great concern and have even turned customers toward paying large amounts of money to switch to a new host. Many developers and technology whizzes alike are warning people to simply not host with GoDaddy.   The overall consensus on utilizing the services of GoDaddy is that you just shouldn’t do it. There are plenty of other service providers that can help you create a better quality website with better hosting as well.   Are you looking for reliable web design and hosting services that won’t put you in an uncomfortable situation? Social Spice Media is here to help. Our talented web developers will make proper adjustments to your website to meet CCPA Law as well as improving the appearance of your website and business as a whole.

Mollie is a freelance blog writer for Social Spice Media. She is currently an MFA candidate at Bennington College Writing Seminars. She has been working in content creation for nearly a decade—from entertainment journalism to corporate and agency marketing, she’s worn a lot of writer hats over the years—and she’s fond of all of them. She loves doing research deep-dives and getting to know a client’s brand before jumping in. She’s just geeky like that.
In her spare time, she can be found hanging out with her dog, listening to true crime podcasts, reading, and cross-stitching. But not simultaneously.

Maria is a Content Creator for Social Spice Media. Maria graduated from CSULB in 2018 with a B.A. in Production Management for Film and Electronic Arts. Before joining Social Spice Media in 2021, Maria worked for various film studios, fulfilling roles within Project Management and Social Media Coordination.
An alumnae of Delta Gamma, she continues to live by her sororities mantra to “Do Good” by advocating and fundraising for Guide Dogs for the Blind, protecting wild mustangs, and breaking the stigma surrounding mental health. In her free time she can be found at the dog park with her dog Luna, or in the kitchen cooking for her friends and family.

Jason Dominguez is a California native and enjoys the beach – and the outdoors in general. He attended Stanford and UC Berkeley and enjoys travel and writing. Jason is fighting the growing wave of tv binge-watching and trying to keep current with his reading list, a struggle against all odds. He balances non-fiction with short stories and poetry.

Matt Bendell is a freelance content/blog writer for Social Spice Media. He has more than 15 years of experience working in various media ranging from TV and radio production to print and digital content creation. He loves to tell stories and share positive messages that will encourage and grow audiences.

Matt graduated from the University of West Florida with a B.A in Communication Arts/Journalism and a minor in Marketing. Over the course of the past 15 years, he has worked in television programming, worked in fund development, and produced an internationally distributed radio program for a large non-profit organization.

When he is not working on media projects, he enjoys playing tennis, golfing, swimming and spending time outdoors with his wife and four children.

Scott Ericson is the Director of Business Development with Social Spice Media. Scott brings over 35 years developing business and partnerships for companies and organizations. His background includes business development positions with a national broadline food distributor, national specialty pharmacy, nonprofit copay assistance organization and a five-year stint with the Chamber in Santa Barbara. He was also a co-owner of a company to nationally distribute natural compounds to clean and sanitize firefighter’s PPE and other emergency services equipment. His most recent business development position was with an IT Managed Service Provider in Santa Barbara.

After growing up in Santa Barbara, he moved around the country with his wife and children. Scott and his wife Cheri have relocated back to Santa Barbara after spending nearly thirty years away. They are living in the house he grew up in, and he enjoys spending time with Cheri, golf, reading and woodworking for relaxation.

Hailey is a Content Creator for Social Spice Media. Her roles include delegating assignments to team members and meeting deadlines, as well as creating and editing content. She thoroughly enjoys being useful and helping fellow team members with tasks. She is passionate for all things marketing, and seeks to learn something new daily.

Hailey graduated from Brigham Young University- Idaho in 2021 with a B.A. in Communications and Advertising. Though she is new to the industry, her special brand of spice is a vital component to the Social Spice Media team.

When she’s not coming up with witty word play, Hailey enjoys singing, doing makeup, and finding music for her latest playlist.

Stacy Pearce recently joined Social Spice as the Director of Creative Marketing with more than two decades of experience in Marketing, Graphic Design, Front-End Web Development and Creative Project Management. Stacy began her professional journey working for Disney Cruise Lines as a member of the inaugural crew for their first cruise ship in 1998, the Disney Magic. While working onboard, she was selected to receive specialized training from Disney in both Public Relations and Guest Service Excellence.

After leaving Disney and working in print design for several years, Stacy decided to make the jump to web design and began working for the well-known training company, lynda.com, as an assistant teacher for their onsite Adobe Photoshop training classes. She also spent many years in the marketing world working for companies like JD Power and Associates, Amgen and Gospel Light Publishing. She then started her own graphic design and consulting business providing logo design, web project management and branding strategy to a wide variety of local groups and businesses.

Stacy joined Social Spice in January of 2020 to help expand their services as a creative designer and a brand strategy specialist.